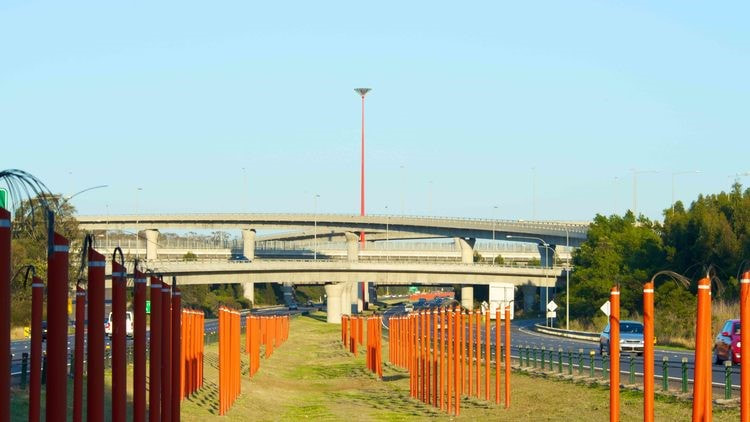 The Light Horse Interchange at Eastern Creek between the M7 and M4, a memorial to the Australian Light Horse, and also the only complete motorway-to-motorway interchange in Australia.
Length- 40km
Route- From the Hills Motorway (M2) and Old Windsor Road (A2) at Seven Hills, travelling in a westerly direction before turning south at Dean Park, to the South-Western Motorway (M5) and Hume Motorway (M31) at Prestons.
Route Number- M7
Width- Seven Hills to Prestons- Two Lanes
Opening- 16th December 2005
Cost- $1.65 billion ( $200 million from NSW Government, $1.5 billion from Federal Government)
Toll- Distance-based- 40.4c per km (capped after 20km at $8.08 as of August 2018)

The Westlink M7 is a 40km tolled motorway linking the M2 at Seven Hills to the M4 at Eastern Creek, the M5 at Prestons, and everywhere in between.
Before opening, traffic entering the city via the Hume Highway from the south or the F3 Sydney-Newcastle Freeway (now M1 Pacific Motorway) from the north was required to negotiate the heavily trafficked Cumberland Highway. On opening in 2005, the M7 Westlink allowed traffic to bypass the Sydney suburbs altogether via a two-lane dual-carriageway link, directing traffic across the furthest suburban fringes of the city to the west.
The M7 Westlink is notoriously one of the least congested motorways in Sydney, with virtually free-flowing traffic on a majority of its route at all times of the day. Despite this, the motorway is well-used, especially by industrial traffic.
Ironically, barely ten years after construction, the M7 has itself become more and more redundant as Sydney has expanded; once a bypass of Sydney’s suburbs, like the Cumberland Highway it too has increasingly become a key suburban route. Whilst traffic levels on the motorway are still tolerable, the government has become planning for the M9 Outer Sydney Orbital which, on opening in the distant future, could supersede the M7 Westlink as the new bypass of Sydney. 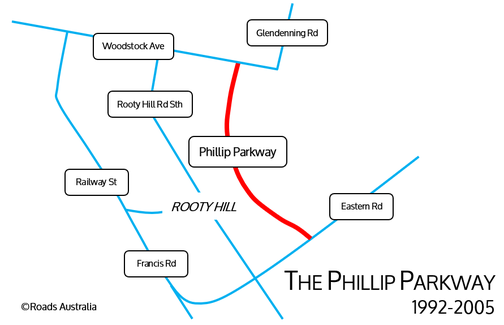 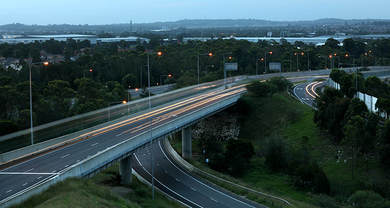 Post-Opening and Current Day
The M7 Westlink has been an inspiring example of a successful PPP (Public-Private Partnership), especially in a country where such projects have since gone disastrously wrong (read more here). By 2008 approximately 119,592 vehicles were using any part of the motorway each day. By 2016, this number had increased to 179,000 vehicles.
As a result of the opening of the M7 Westlink, the Phillip Parkway’s legacy lived on; it had been originally conceived as a route linking the F2 Castlereagh Freeway with the F4 Western Freeway, which the route now does as the M7.
The motorway was not originally conceived with a toll in mind, however it was decided before the project begun that it would be operated as a toll road in order to recoup costs to construct the road. Electronic toll gates were installed at all entrances and exits to the road, with a distance-based tolling scheme currently capped at $8.08 (as of August 2018) employed along the road. The motorway is currently owned by Transurban, who sponsored the construction of the motorway. Under the contract originally arranged by the operators of the motorway, the motorway will be tolled until 2048; originally set to expire in 2037, the period was extended in order to cover costs for the NorthConnex project.
The M7 Motorway is one of the few motorways in Sydney that has not suffered from severe congestion, with no major upgrades having been implemented on the road in its 13 year history, and with no significant plans for the road existing into the future. This is owed to the rare example of forward thinking employed by the government in constructing the motorway, arguably not a priority when it was constructed and yet certainly appreciated. The motorway has greatly enhanced connectivity to Western Sydney from the Northern Suburbs, as well providing a speedy bypass of Sydney that allowed traffic along the Cumberland Highway to be significantly reduced.
The M7 Westlink is the single longest section of the 110km Sydney Orbital, as originally proposed in Roads 2000, that allows traffic to bypass urban centres around Sydney. On the opening of the Lane Cove Tunnel in 2007, the Sydney Orbital as envisioned by the plan was completed.
When the NorthConnex opens in 2019, linking the M2 Hills Motorway at West Pennant Hills with the M1 Pacific Motorway at Hornsby, traffic will be able to properly pass between the Pacific Highway and the Hume Highway without encountering any traffic lights.
Eventually, in the distant future, the Westlink M7 may be superseded by the opening of an Outer Sydney Orbital. Such an orbital could provide a wider bypass of Sydney. Commonly dubbed the M9 Outer Sydney Orbital, preliminary designs have already been released for the motorway. For more on the project, visit this page.
links
Powered by