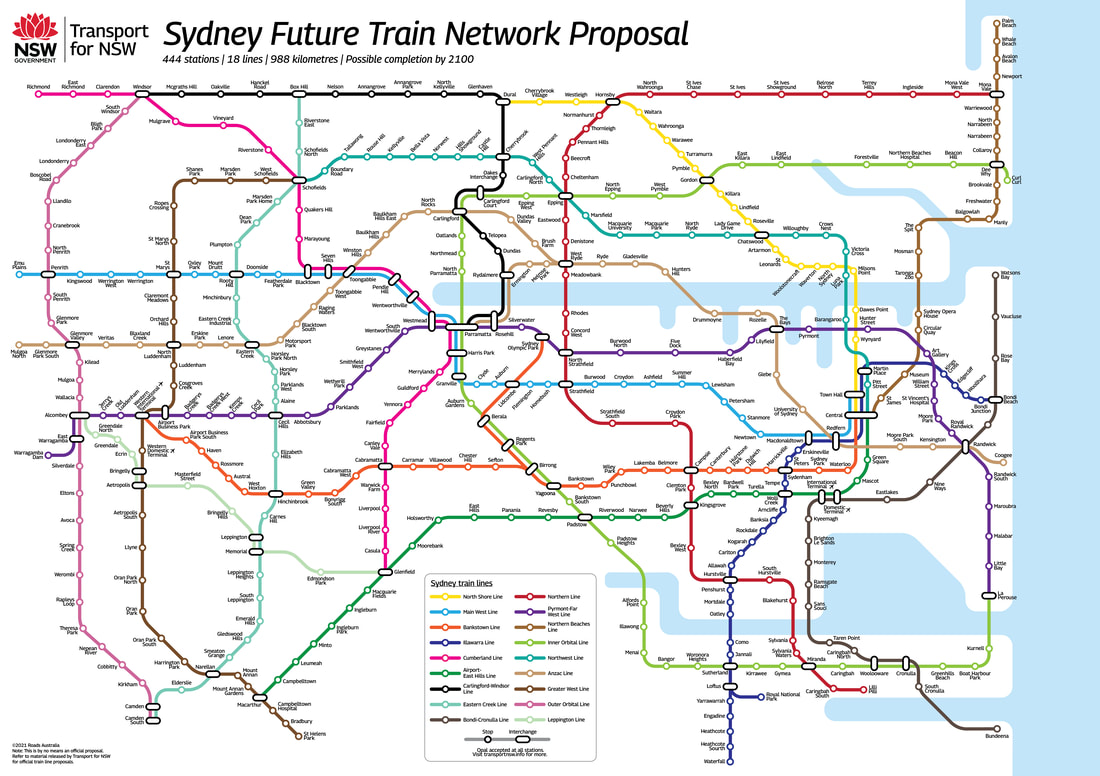 Click here to go to a PDF of this map.
Made this to kill some time during the Sydney lockdown of 2021!!
There are 444 stations spread out across 18 different lines, with about 988 km of track utilised, which would make it one of the longest train systems in the world. Many lines have been retained but extended or with stations added. My general rule was that no two stations could be spaced more than 3km apart, which resulted in the addition of stations to old lines. Obviously, this rule means that rural areas, such as Warragamba in the far west of Sydney, have a very disproportionately high number of stations compared to their population, but this is just a fantasy map after all! I worked in a few proposals from Transport for NSW, such as their proposal to extend the Sydney Metro West to La Parouse, as well as an old now-defunct proposal to build a line from Redfern to West Ryde known as the Anzac Line. I also came up with my own proposals, such as the Outer Orbital Line which would likely not be needed for at least half a century (if ever) but would certainly prove to be a useful link were it to ever be built.
​The map largely focuses itself on the three cities that have been envisaged for Sydney in the future; the Eastern Harbour city (Sydney), the Central River city (Parramatta) and the Western Parkland city (Badgerys Creek). Hence, most lines ultimately feed traffic through to one of these three locations. This largely results in a grid-like train system for Sydney more akin to the London Underground, as opposed to the current radial system which aims to feed most traffic to Central; it marks a shift in urban planning for Sydney.
Obviously, many of my choices would never come to fruition, with many simply being done to make the map look nicer, as this is not an actual proposal but rather something I made to kill some lockdown time! I rearranged some lines, dismantling the City Circle mostly because I am not a fan of how shared track looks on a map; for usability purposes it obviously wouldn’t be very smart to dismantle the circle. The choice to redirect the Northern Line such that it forms a bypass of the city as opposed to going to the city would definitely be controversial, and would never be done; again, I just did this because I’m not a fan of how shared track looks on a map. I also chose to reopen the Carlingford Line, even though that’s definitely never going to happen.
Ultimately, most proposals on this map would never be built, even by the year 2100. The odds of a line linking Kurnell to La Perouse, a line linking Cronulla to Bundeena, the reopening of the Royal National Park branch, an extension of the North Shore line to Dural, a line serving the more affluent eastern suburbs north of Bondi such as Vaucluse or Watsons Bay, or many other choices in my proposal, are all infinitesimally small. These were all mostly done just to make designing the map more fun haha. However, there certainly is potential for the lines to the west of Sydney to be built, although the stations would most likely be far fewer and more spread out than in my proposal.
Below you can see all the locations of my proposed stations.
Hope you all like it!! Feel free to leave any comments or thoughts below!!
Powered by