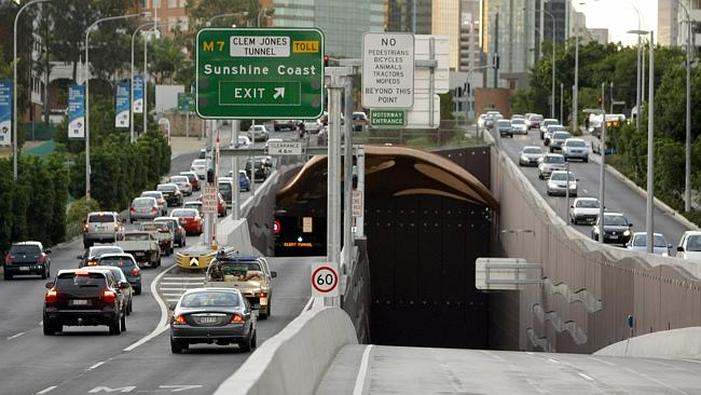 The Clem Jones Tunnel forms part of the M7/A7 route in Brisbane, a 4.8km tunnel underneath the inner city. Opening in early 2010, the freeway links to the Pacific Motorway and Ipswich Road on its southern end, before meeting the Inner City Bypass at Woolloongabba, continuing to the Airport via the Airport Link tunnel. The freeway has been an economic disaster for the owners, having gone into receivership only one year after opening. The project echoes the failures of the Cross City and Lane Cove Tunnels, adding another financial disaster to Australia’s roads. This article will explore the construction of the route, its failed traffic targets, and why the route has been a disaster.

History
Congestion in the inner city, including Fortitude Valley, had slowly been building up for a number of years in the early millennium. While traffic could use the Pacific Motorway and Inner City Bypass to get around the city, traffic could not get through the city itself without negotiating busy CBD streets.
Studies for a set of freeways to improve access across Brisbane CBD and its suburbs were carried out by the Labor government, which were turned into a master plan by Campbell Newman in 2004. He dubbed the project TransApex, a series of five projects, which were;The document for this plan is available here.
Major planning got underway in 2006 for the second stage of this master plan. This was for a tunnel underneath the CBD, which would provide a third crossing of the Brisbane River within the city, to help alleviate congestion.
In April that year, the government announced that they had awarded the contract for construction of the road to Rivercity Motorway Limited, the road at the time called the North-South Bypass Tunnel. The winning bid by the group was to be two lanes in either direction, starting at Woolloongabba and ending at Bowen Hills. Interestingly, the other bid by Brisconnections, which would later operate the Airport Link, was to be three lanes at an extra cost of only $20 million.
Maunsell Australia, which supplied data to Rivercity Motorway, predicted the traffic levels for the road to rise from 60 000 vehicles in 2010 to 100 000 vehicles per day by 2012, rising again to 110 000 in 2014, and again to 135 000 in 2026.
Construction of the freeway begun in September 2006, as one of the biggest road projects’ that Queensland has ever taken part in. The toll road was to be a Public-Private Partnership.
As part of construction, TBMs (Tunnel-Boring Machines) were used, which are currently being used on the Sydney Metro Northwest project. When being built, the TBMs were the biggest in the world (at a diameter of 12.4m and weight of 4000t), at a cost of $50 million per unit, 2 of which were used; Matilda and Florence. The two TBMs started at Bowen Hills on the project’s north, moving around 20 metres each day and requiring 22 people at a time to operate. Each of the two machines arrived at Woolloongabba in April and May 2009 respectively.
3.5 million tonnes of rock were excavated as part of the project, with 280 000 cubic metres of concrete lining installed over the project. The deepest part of the tunnel is 60m beneath ground level. At the time, the road tunnels were the longest in Australia, surpassing that of the M5 East in Sydney.
Meanwhile, above ground, widening of roads and constructions of ramps was underway. 18 bridges were built as part of the project. At the southern end, construction of links from the Pacific Motorway and Ipswich road were underway, along with widening of the M3. Construction at the northern end involved a 3-level spaghetti-styled interchange connecting the tunnel with the Inner City Bypass and Lutwyche Road.
In December 2007, the North-South Bypass Tunnel was renamed the Clem Jones Tunnel, in honour of Clem Jones, the lord mayor of Brisbane from 1961 to 1975.
Smoke stacks for the freeway were constructed at Jurgens St in Woolloongabba, and O’Connell Terrace at Bowen Hills, 43m and 36m tall respectively.
The project wound towards completion by late 2009. On February 28th 2010 a walkthrough of the tunnel was held, first with a charity run of 5 000, then a public walk which attracted 50 000 people.
The tunnel was opened late on March 15th 2010, first northbound then southbound; the entire road was opened by midnight. With its opening, drivers could now utilise;The opening of the Clem7 (known such as its alphanumeric route marker is M7) was widely publicised. A toll-free period was instated by the operators of the motorway, Rivercity Motorway, for 3 weeks until the 5th April, a standard practice on new toll roads.
It was at this point that things went pear shaped for the company, as it soon became apparent that the tunnel had done what others (in Sydney) had done prior; failed.

Post-Opening and Current Day
The Clem7 experienced steady traffic volumes of 59 000 vehicles during its toll-free period; a concern considering this was what had been expected with a toll. By the time the toll-free period was over, this number dropped to roughly 22 000 vehicles per day; this was with a discount, at $2.95. This was to be raised to $4.28 on May 9th, making it the most expensive road tunnel in Australia alongside the Cross City Tunnel in Sydney. However, the discount period was extended until the end of the financial year, before being further discounted from 28th June to 15th November 2010 to $2.00.
This would inevitably do nothing. Barely one-third of the estimated 60 000 vehicles were using the road by the end of 2010, and certainly not close to the 100 000 estimated for 2012. The issue of congestion on surrounding roads had not been solved either; Story Bridge had barely improved, with the Inner City Bypass shedding some vehicles.
It was when Rivercity Motorways fell into receivership on the 25th February 2011, not even one year since completion of the project, that it could be truly said that the road had been an economical disaster. Shares for the road fell by nearly 100%, with the company owing $1.3 billion to the banks.
Since then, the road has been sold off the Queensland Motorways, which was then acquired by Transurban, with tolls at $4.85. The road, when it is supposed to be carrying the same amount of traffic as the Gateway Motorway and other freeways, is still at 20 000 vehicles, a mere shadow of what could have been.

What went wrong?
First, some background into other tunnel projects is required.
The Cross City Tunnel in Sydney can be described as an early replica of the Clem7. It too crossed from one side of Sydney to the other; from the Western Distributor and Darling Harbour to the Eastern Distributor and to Bayswater Road, linking the inner western and eastern suburbs. It too had high estimates before its opening of in upwards of 95 000 vehicles, which turned out to be a huge exaggeration, at merely 20 000 vehicles today. Its successive owners went into receivership twice, before being acquired by Transurban. Its toll is too at a ridiculous price; nearly $5 one-way when a free, slightly slower alternative is easily available.
The Cross City tunnel was one of the first real economical disasters for Australia’s infrastructure, which was followed by the Lane Cove Tunnel a few years later, owners also going into receivership (now operated by, that’s right; Transurban).
However, I use the Lane Cove Tunnel whenever I have to travel into the city, and I believe it has recovered substantially from previous years in terms of traffic volumes, so I will not cite this as an example.
Both the Cross City Tunnel and Clem7 have several traits in common;Even so the Clem7 operators were adamant that no one cared about the toll, installing clearer signs in September 2014 in regard to the last bullet point above so that motorists understood the route better. They were wrong; it really was the toll that was driving people away from the route.
As a Sydneysider I can (attempt to) argue for reasons that the Cross City Tunnel is not used. The route is confusing and feels unnecessary. Motorists generally do not need to get from the Eastern Suburbs to the Western Suburbs and vise versa, bypassing the CBD. Rather, they are entering the CBD, and if the former is required ground-level routes through the CBD are most commonly used. This would be so much different, however, if the Cross City Tunnel were free; I can guarantee that the road would be more heavily used.
Proof that this is the case can be found here. The M5 East is certainly a complete failure of a road, however in the complete opposite sense as the aforementioned freeways. The freeway is congested completely, having significantly more cars using the road than traffic estimators had expected, arguably due to the lack of a toll (though this is one of a mountain of flaws of the motorway). The M5 East is what happens when you do not toll a route; the Cross City Tunnel and Clem7 are what happens when you do.
Of course, had traffic forecasters estimated correctly the number of people who would use the Clem7, the road would probably not have been built in the first place at the cost of $3.2 billion. It is most probable that the forecasters adjusted the results intentionally for their clients, Rivercity Motorway, so that the client would receive the winning bid for the motorway.
Interestingly, this article predicted a shortfall of traffic on the route mere months before completion of the road. Even traffic estimators for the Northern Link (now the Legacy Way Tunnel), which were not trying to sell a bid and were neutral to the project, saw that the road would be severely underused months before it opened in the aforementioned article.
Of course, if the tunnel had seen volumes of 100 000 vehicles, 2 lanes would most likely have not been enough from the get-go, as is clear on the M5 East.
And so, another tunnel has entered the chapter of economical disasters in Australia’s infrastructure. In an era when our cities face congestion every day, it comes as a bitter truth that there are roads that are in fact being severely underused every single day. 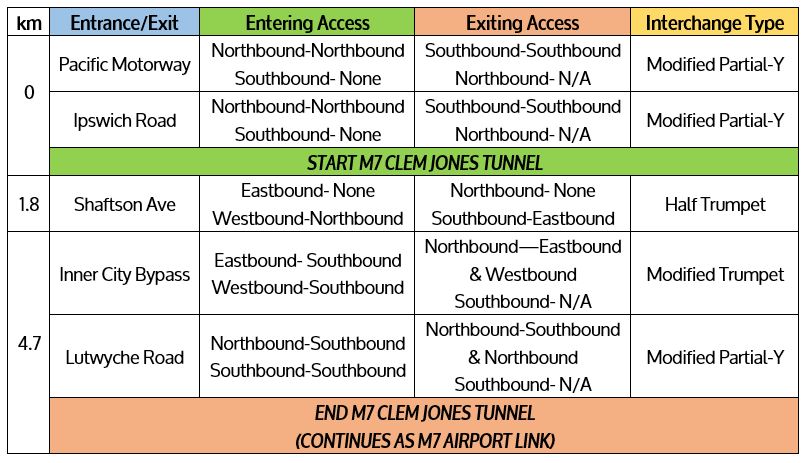