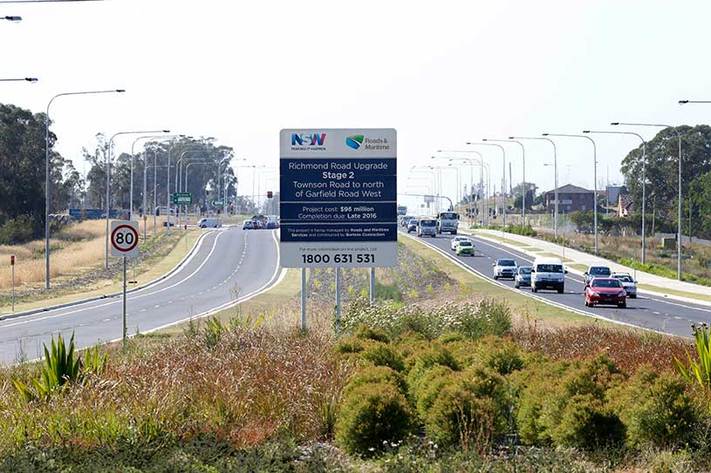 An RMS sign announcing updates along Richmond Road (A9). Although upgrades are being undertaken along the A9, plans are underway for construction of a new M9 Motorway set to supersede the A9
The A9 is a route through the extreme outskirts of metropolitan Sydney, joining Campbelltown with Penrith and Windsor. Currently the route plays a vital role in linking these three centres of the ever-expanding Western Sydney.
Western Sydney is the fourth biggest city in Australia in its own right. With various developments rapidly underway across Western Sydney, stretching from Campbelltown to Penrith and even Windsor, it is clear that the region is slowly becoming a global city. By 2025 the region will host its own airport, the Western Sydney Airport at Badgerys Creek. Housing developments across the region match Sydney, new housing areas including Oran Park and Marsden Park.
Currently upgrades are being undertaken along the A9, a primary arterial through the region. Although these upgrades are welcomed in coping with the growing region, it is clear that these upgrades will only be sufficient for at most 20 more years. It is for this reasons that the M9 Motorway has been proposed by the NSW Government.
The M9 Motorway was first mentioned in June 2014 by the State Government in the NSW Budget (read the article here). The motorway was mentioned as an Outer Sydney Orbital Corridor, with $4.6 million set aside for alignment investigations and land preservations; getting the route ‘shovel-ready’. The project was announced again in the State Budget nearly 3 years to the day later in June 2017 (read the article here). Along with two other motorway corridors, $2.09 million was set aside for further planning towards the M9 Outer Orbital, which is interestingly half of that given three years earlier.
Looking at these low numbers, it is clear that the M9 Motorway is unlikely to be constructed in the near future, with priority instead targeted at planning the route and preserving the corridor. However, even though it could be many decades before construction can even start, it is vital that the corridor is preserved. Planners must determine the best route for the M9 Motorway to take before buying land to allow for construction once funding is available and the Government views the project as a priority. This process has been commonly undertaken on prior projects such as the M4 East (although this land was then rather foolishly sold off by Neville Wran in 1977; read more on site Ozroads here).
Since the identification of the corridor of preservation required is so necessary, I decided to create a design for the M9 Motorway myself. The design assumes that the motorway will be entirely above ground. This design was done carefully, to avoid existing houses, while also going over easy terrain, and most importantly taking a logical route from south-western Sydney to north-western Sydney.
As a result, several corridors were identified. A combination of the various identified corridors was chosen, forming the RoadsAustralia proposal for the route of the M9 Motorway, which can be seen below. View the image in a bigger size here. 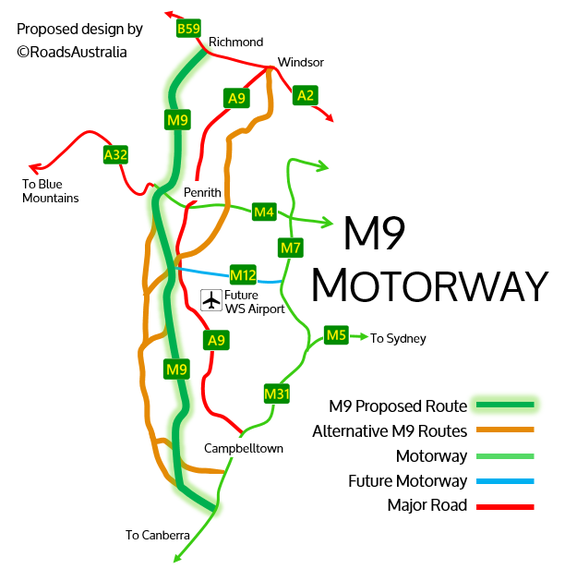 A specific map which shows the exact route of the M9 Motorway, as well as the other potential routes, can be viewed below (or through this link). It was by using Google MyMaps that I was able to create this proposal. View the map in ‘satellite’ mode to get a clearer idea of the land being traversed, and the low amount of house acquisitions required for the route.
There are three main variations to the current alignment that are possible. There is a poll under each alignment asking which you prefer, allowing me to have a better idea of which alignment the M9 should take, so be sure to answer.
​Final Alignment
The final route stretches 70km. The alignment closely follows the current A9 alignment. The route is positioned such that it can efficiently connect Richmond, Penrith, the future Western Sydney Airport, and Campbelltown, with minimal housing acquisitions.
The motorway should be built to six lanes, with three lanes in each direction. As little as possible of the freeway should be located underground, to save money and allow for easier roadworks on the route should the need arise. If possible, the motorway will not be tolled, or if necessary a low toll may be implemented.

At my best estimate, we can expect the M9 Motorway to open earliest in 2035, however a more reasonable estimate would put its opening anywhere between 2040 and 2060. In other words, the opening is so long away we’ll probably already have been enslaved by robots. Even so, it is important that we do preserve corridors by disallowing any developments on land along the route, to ensure the route is ‘shovel-ready’ in the future, on the slight off-chance that we are not enslaved by robots.
NOTE; It should be stressed that a majority this page details an unofficial design for the M9 Outer Sydney Orbital drawn up by the maker of this hobby website. This proposal is by no means official and was made before preliminary designs were released by the government for the motorway in 2018. This page is yet to be updated to reflect this.
links
Powered by