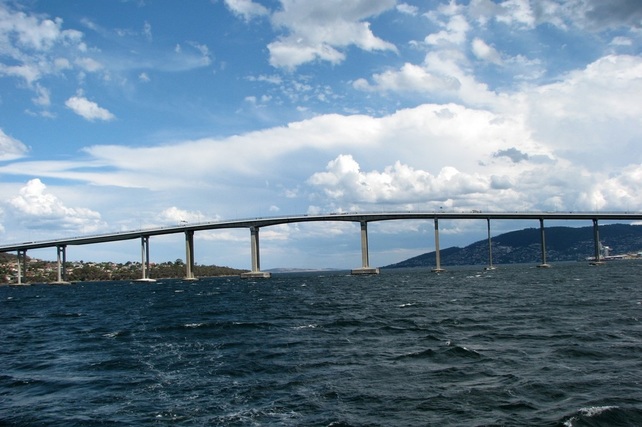 Looking from the River Derwent up to the Tasman Bridge; Courtesy of Wiki Commons 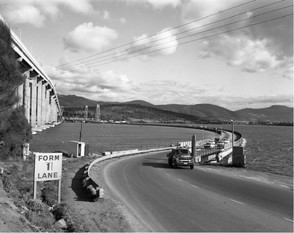 Just about every city in Australia has a vital bridge; Sydney has the Harbour Bridge, Melbourne the West Gate Bridge, Brisbane the Gateway Bridges and Perth the Narrows Bridge.
And yet, perhaps there isn’t one as vital as the Tasman Bridge in the often-forgotten city of Hobart. At 1.4km, it is longer than the Sydney Harbour Bridge and is one of only 3 crossings of the River Derwent in Greater Hobart
The Tasman Bridge is an essential part of Hobart’s transport system, linking the western CBD with the less-populated eastern shore. The bridge – or lack thereof – brought Hobart to its knees when, on the 5th January 1975, collapsed, killing 12. The impacts on the city thereafter were long-lasting; the short 6km drive suddenly became seven times longer, effectively isolating both communities, and bringing to light how even just one bridge can shake an entire city.

History-
The Hobart Bridge was built in 1943 to allow for connections between the eastern shore of Hobart and the western shore. The first of its type, the pontoon bridge allowed for rapid development of the western shore of Hobart. Perhaps the bridge was a victim of its own success; traffic volume increased due to this fast growth on the western shore, resulting in chronic congestion (10 000vpd). Also, since the bridge was so close to the water (it was a ‘’floating’’ bridge), its span needed to be lifted every time a ship passed through the river, stopping traffic. Hence, a new bridge needed to be built.
In 1956, the Department of Public Works Tasmania sought engineers Maunsell & Partners Pty Ltd to create a design for a new crossing of the River Derwent. It was determined that building a low-level bridge with a span that could be lifted – allowing boats to pass underneath – would be both troublesome and also barely cheaper than building a bridge high enough to not need a lifting-span.
Issues arose with construction; Hobart had never embarked on a project both this ambitious, or expensive. Construction equipment, such as jacks and wires, had to be sourced from the UK, with reinforced steel from the Australian mainland, adding to the cost of the bridge. Such factors made the bridge one of the more costlier concrete bridges at the time (£7 million; $14 million in 2015).
Tenders were invited in April 1959. In November that year, contracts were awarded to Reed, Braithwaite, Stuart and Lipscombe. In May 1960 construction commenced on the bridge.
Prerequisites for construction were that the old Hobart Bridge would have to remain open until the Tasman Bridge was completed, and that shipping lanes would have to remain open along the River Derwent.
The base of the river composed of bedrock, dolerite and basalt below the silt; good conditions for the foundations.
Links
​1. http://web.archive.org/web/20150104061202/http://www.abc.net.au/news/2015-01-04/archival-abc-news-report-from-the-tasman-bridge/5999188
Powered by