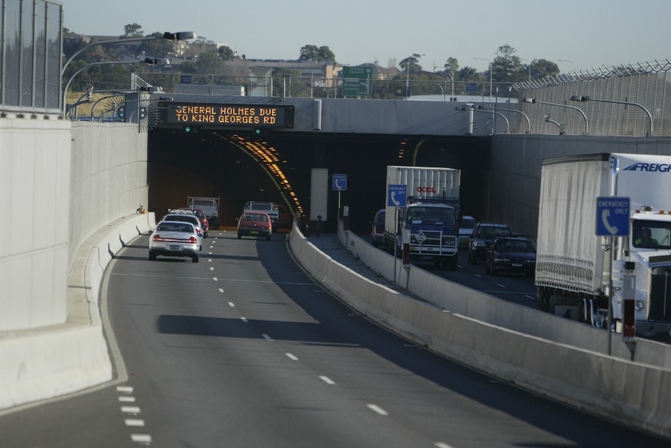 The M5 East is a four lane freeway running through the South-West of Sydney, linking the South-Western Motorway and King Georges Road at Beverly Hills with General Holmes Drive and the Airport at Kyeegmah. It is quite literally the most congested piece of infrastructure in the entire of Sydney and possibly even Australia, a textbook example of a lack of forward thinking, which has only increased the hatred of motorways by Sydney-siders. The Minister for Roads has dubbed it ''crappy'', the road has been hugely unpopular with motorists, and it continues to exceed its design capacity with every day passing. This page will explore the history of the road, the problems it has brought and what the government plans on doing about it.

History
The South-Western Motorway was completed in 1994 with the opening of the Casula Bypass, providing a continuous link between King Georges Road at Beverly Hills and the Hume Highway at Prestons (other than a signalised intersection at Moorebank Avenue). However, the motorway's abrupt ending at Beverly Hills meant that motorists had to drive north and negotiate packed streets to journey into the city.
Another issue that was causing trouble in the general area were the trucks delivering freight to and from Port Botany out west of Sydney, unable to make this journey without driving along local streets through the Inner South suburbs.
Throughout the course of the late 1980s and early 1990s, the government undertook a series of studies and reviews to determine the best route that an extension to the current South Western Motorway could take. Early plans saw a six-lane freeway linking the South-Western Motorway with the Inner City and St Peters. Further studies by the RTA, along with a requirement to preserve bushland in Wolli Creek, meant that the alignment was changed to a more southerly approach. This was also due to the need to create a freight route that trucks could use to travel to and from Port Botany.
The RTA released an EIS (Environmental Impact Statement) in 1994, with further information released in 1996. The plan aimed to build a four lane freeway, which would provide more direct access to Port Botany, with the potential to form part of the Sydney Orbital Network, at the time merely the already-built M5, Sydney Harbour Tunnel, Warringah and Gore Hill Freeways, and Southern Cross and General Holmes Drives. The new freeway was forecast to be carrying 66 000 vehicles by 2011, meaning that two lanes in either direction would certainly suffice.
The original plan was somewhat different to the final one; a bridge over the Cooks River was planned, rather than a tunnel, along with a bridge over King Georges Road.
Construction commenced in 1997, first with the duplication of the single-lane freeway between Fairford Road (MR6) and King Georges Road (MR3) to 4 lanes. The M5 East itself was built under a public arrangement; this meant that the M5 East would be toll free. At a cost of $800 million dollars, it was one of the more costly road projects of the time.
The freeway officially opened to traffic on the 10th of December 2001.
Motorists were now able to utilise-At the time, the 4 kilometre M5 East tunnels were the longest road tunnels in Australia, an early hallmark of the project. The government was proud to proclaim a freeway link significantly improving access between the south-west and the Airport and CBD. Many south-western Sydney motorists were looking forward to an easier ride along a freeway into the CBD.
Praise for the project would soon run thin, however, as the road spiralled into congestion.

Current Day
The M5 East is notable for having exceeded its designed capacity within merely months of completion. In upwards of 75 000 vehicles were using the freeway each day in 2002, having already exceeded the 2011 forecast of 66 000 vehicles a day. Currently, over 100 000 and possibly 110 000 vehicles use the road each day, increasing by 1.4% per year, making it not only one of the most congested freeways in Sydney, but also one of the slowest. The daily commute becomes a nightmare when driving on the M5 East, with private vehicles mixing in with trucks hauling freight from Port Botany, and traffic fed in from both the South-Western Motorway and General Holmes Drive.
Worsening its reputation, however, were revelations early on that, due to the overflow in capacity of vehicles in the two tunnels, air quality was not being properly filtered, and that the tunnel was heavily polluted as a result. Studies in 2008 revealed that the tunnel was one of the most polluted in the world; on average, 50-150 parts per billion of nitrogen dioxide were recorded in tunnels globally, but that concentrations in the M5 East were nearly double this.
To only make an already bad situation even worse, the M5 East has been beset by technological failures and mishaps over its history, so much so that the tunnel and freeway have led to the closure of the freeway 6 times between 2002-2008, obviously causing chaos for motorists using this heavily trafficked piece of infrastructure.
The biggest flaws in the project, which are stunning in that they were overlooked in planning, include;
​Future
For many years plans to widen the M5 East have gone nowhere. The need for duplication has been present ever since opening, and the government has undertaken several studies in response.
In May 2008, the government begun a study into the feasibility of duplicating the M5 East, possibly through a new corridor. Consultation with the community begun in November 2009.
In October 2012, the State Infrastructure Strategy for NSW was released, proposing construction of the M5 East duplication, extension of the M4 as the M4 East, and a link between the two known as the M4 South. This recommendation was accepted by the O’Farrell Government, expected to cost $14 billion.
The M5 East duplication, dubbed the New M5, is part of the WestConnex project. It involves duplication of the current M5 East at the King Georges Road interchange from four lanes to eight, extending the ramps of the interchange, and including a link into the New M5 Tunnels. Major construction is set to start in mid-2016, with opening in 2019.
Information about the New M5 will soon be available on a separate page
Whether or not this project will work, however, is uncertain. While the government ascertains that the freeway will ‘’ease congestion, result in more reliable trips and connect communities’’, there is also the chance that this freeway will not do anything to ease the congested M5 East, expected to carry 112 000 vehicles by 2031. If it does, it may simply push the congestion into St Peters and surrounds, or onto surrounding streets when a toll is introduced on both roads.
Even if it does, there are still 3 years until opening of the freeway. It has been 15 years since the M5 East opened, and gridlock continues to beset the road each and every day.
LINKS
Links-
Powered by