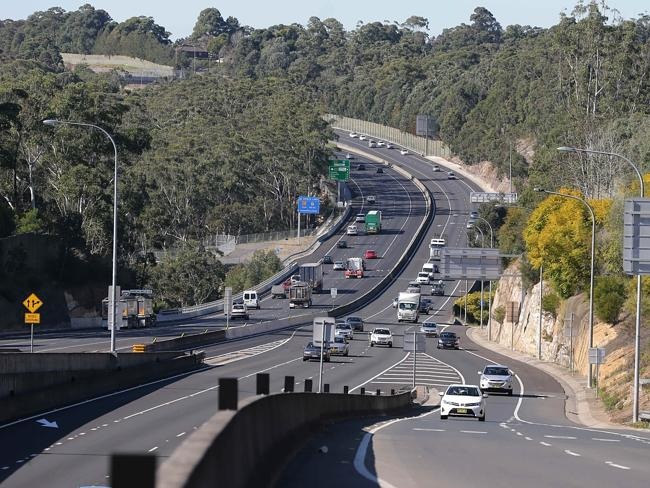 The Hills Motorway is a mostly six-lane freeway linking Old Windsor Road (A2) and the Westlink (M7) at West Baulkham Hills with Epping Road and the Lane Cove Tunnel. The motorway opened to traffic in 1997, originally a four lane freeway. At 20km, it provides better access between the city and the North-Western suburbs; the Hills District. It currently links to two motorways at either end, and will provide access to a third (NorthConnex) in 2019.

History and Construction
The current Hills M2 started off as a proposed route in the early 1960s to the recently released land of the Green Belt, a brainchild of the County of Cumberland scheme. It was to be dubbed the Castlereagh Freeway, following the current route of the motorway, however planned to travel as far as the Blue Mountains, providing a second route west of Sydney, the other being the F4 Western Freeway (now M4).
The freeway was barely noticed up until the late 80s, whereby the government undertook several studies to determine the best route for the freeway. In 1989 an EIS was commissioned by the DMR for Stage 1 between Epping Road at Ryde and Pennant Hills Road at Beecroft, at the time the official road authority for the state. A commission of inquiry in response the following year strongly objected the construction of the road.
While acknowledging the congestion on the main arterial within the area of study for the freeway, Epping Road, the inquiry put forward a series of alternate recommendations. This included an upgrade of Epping Road to six lanes, widening Carlingford Road, along with an interchange at Epping and Carlingford Roads, and at Carlingford and Pennant Hills Roads.
Regardless, the recently formed RTA issued two new EIS statements in late-1990, releasing them to the public in 1992. In 1993, after receiving 14 000 submissions regarding the expressway, the government announced the construction of the North-West Transport Link, later renamed the Hills Motorway for the region of Sydney it passes through.
Contracts for construction of the 21km road were awarded to Abigroup Ltd and Obayashi Corporation, with management by the Hills Motorway Ltd. The project was to be a toll road, built as a BOOT (Build-Own-Operate-Transfer), with tolls set to run for roughly 40 years from opening until the 2040s. Construction was to cost $644 million dollars.
The freeway was to be built from Old Windsor Road at Seven Hills, east through Baulkham Hills and the Hills, north of Epping, then in a general south-easterly direction through Macquarie Park to end at Epping Road in North Ryde.
One of the more remarkable points of this project, however, was the inclusion of a dedicated bus lane from Windsor Road to Beecroft Road, with entrances at these roads as well as Barclay Road in North Rocks and Oakes Road on the Carlingford-West Pennant Hills border.
The freeway opened on the 26th May 1997, seven months ahead of schedule. With its opening, motorists had access to-​
Post-Opening and Current Day
From opening, the freeway greatly improved access between the city, the Hills District and North-West. However, the freeway dumped traffic onto local roads at either end; Old Windsor Road at Seven Hills, and Epping Road in North Ryde. On the western end, traffic was required to filter on Old Windsor Road to continue to the far North-West, Windsor, or the M4 via the Prospect Highway. On the eastern end, traffic needed to drive roughly 3km along Epping Road to enter the Gore Hill Freeway at Artarmon and complete the journey into the city.
Six years after opening, the very first steps in solving these issues were undertaken. The Westlink M7 project was announced, linking the M2 at Seven Hills with the M4 and M5, meaning traffic could continue further west from the Hills.  The M7 opened 8 ½ years after the M2 in December 2005.
The bottleneck on the eastern side of the motorway still remained, however. To solve this, the Lane Cove Tunnel project was announced, a tunnel linking the M2 at North Ryde with the Gore Hill Freeway at Artarmon. Almost 10 years to the date since the M2 opened, the Lane Cove Tunnel was opened, on the 25th March 2007. Not only was this the missing link between two important arterials – it finally completed the Sydney Orbital Network.
The freeway’s operations and toll collection were handed over to Transurban in 2006, which later acquired the Lane Cove Tunnel.
By 2008, 47 000 vehicles were using the M2 freeway each day, slowly increasing each year thereafter. An upgrade of the freeway was started in January 2011 and completed in August 2013, which involved-Transurban and the government had decided to not allow further access at Lane Cove Road as part of the upgrade, however back flipped on this decision barely months after completion of the upgrade. Construction of an southbound to eastbound on-ramp from Lane Cove Road begun in November 2013 and was completed in July 2014.
The motorway went cashless in 2012, five years after originally planned. Toll gantries are located at the former toll plaza at Macquarie Park. This also marked the end of eastbound traffic wishing to exit onto Christie Road required to pay by cash.
Roadworks have been non-stop on the M2. The 2011-13 upgrade, followed by the addition of an eastbound ramp at Lane Cove Road, are now being followed by an upgrade in preparation for the NorthConnex.

Future-
With the completion of the M7, traffic no longer was required to travel on Cumberland Highway to get from the north of Sydney and Newcastle to south-western Sydney, Canberra and Melbourne. However, a gap in the route remained between the M2 and F3/M1.
To remedy this, the NorthConnex project was announced in 2014, with major works beginning in 2015. Set to finish in 2019, part of the project includes the re-widening of the Pennant Hills Road to Windsor Road section to 8 lanes, merely three years after the previous upgrade.
An interchange at West Pennant Hills-Beecroft-Carlingford will also be constructed, providing eastbound access to the NorthConnex and westbound access onto the M2. Notably, there are no connections into/from the city, which could cause issues in the future.
The North-West of Sydney is also seeing the construction of the Sydney Metro North-West, which will result in the removal of bus services on the M2 in 2019, closing access at Beecroft, Oakes, Barclay and Windsor Roads.
In 2014 nearly 63 000 vehicles used the M2 each day, which is only set to rise. It could be only years before another upgrade to this vital link in Sydney’s Orbital is due, possibly at its eastern end where traffic is the heaviest in peak hour. 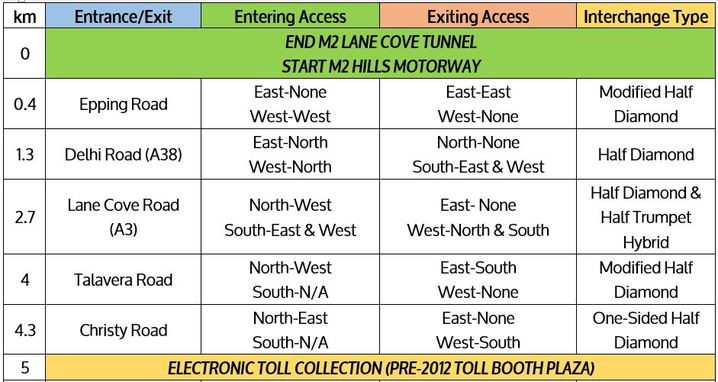