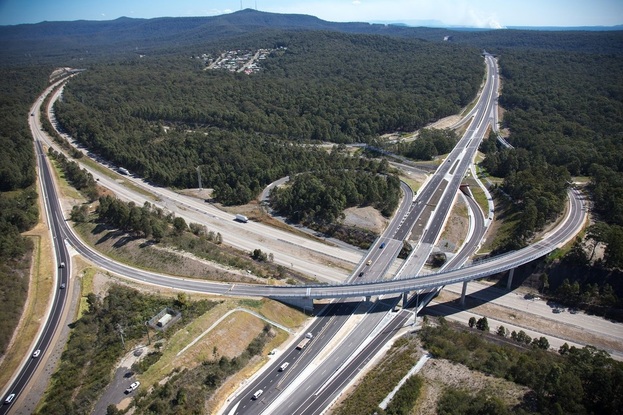 Looking south-west over the Newcastle Interchange. The M15 passes over the M1 and ends at this junction; Courtesy of Theiss 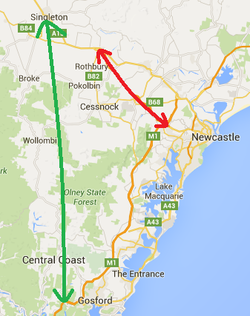 ​The M15 is a 40km expressway linking Newcastle with the Upper Hunter, providing a bypass of Maitland and Branxton for heavy and light vehicles and overall reducing congestion across the region. First proposed as a route to Singleton via Peats Ridge, the route developed into an expressway that would cut across the Hunter and alleviate congestion. After being opened in 2014, traffic along the former route of the New England Highway was drastically relieved, freeing up towns from traffic.
​
Pre-Construction-
A freeway linking the F3 Freeway (now M1) to Singleton had been earmarked since the 1960s whilst the F3 was being built, with the freeway spurring off the F3 at Calga to meet the New England Highway at Singleton, via Wollombi. This route would have usurped parts of Peats Ridge Road, the former alignment of the F3 between Calga and Somersby, before traversing the mountainous Central Tablelands. Plans for this route were scrapped before any significant planning.
Plans for a link road bypassing the New England Highway went unnoticed up until the very late 1990s, when planning by the RTA got underway for a connection between the F3 and Branxton.  Originally planned as the Kurri Kurri Corridor, the design for the road was approved in 2001, renamed the F3 to Branxton Link.
The federal government allocated $4 million in the 2002 budget for land acquisition and planning of the route, alongside potential upgrades to John Renshaw Drive. In June 2004 $253 million was pledged under the Auslink program, which fell short of the actual price tag by $100 million.
Pre-construction of the freeway took place from 2006-7, with a further $1.5 billion promised from the Federal government in the May 2009 budget, at which point the freeway was officially named the Hunter Expressway, for the region it passes through.
The design remained largely unchanged from the original one of 2001, with only minor changes introduced in 2007 including the rise in the speed limit from 100km/h to 110km/h, and the closure of parts of Averys Lane. The document detailing these changes is available here.
Contracts were awarded to the Hunter Expressway Alliance, consisting of the RTA (now RMS), Theiss, Parsons Brinckerhoff and Heider Consulting, to construct the eastern 13km of the route between the F3 and Kurri Kurri. The document detailing construction by this alliance can be accessed here.
​The remaining western 27km of the route to Branxton was built solely by Abigroup Contractors Pty Ltd. By 2010, construction was finally set to start on the now decade-old proposal. 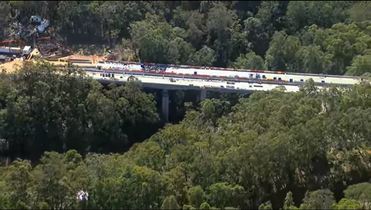 Construction of the twin viaduct bridges through the Sugarloaf Ranges
​Construction-
On 11th August 2010 construction on the eastern 13km of the project commenced, with the then-current premier Kristina Kennelly there for the first turning of the sod, which can be seen in this video.
Prior to the commencement of construction, workers were required to fill the many mine shafts and tunnels that had been created by miners throughout the course of mining in the Cessnock region. These tunnels were filled with a grout sealer so as to stabilise the ground, rendering the ground stable.
The very eastern portion of the project, stretching 6km, was easily the biggest hurdle the construction team faced. Crossing over the difficult terrain of the Hunter Valley’s Sugarloaf Ranges, it was never going to be an easy task to construct this portion of the project. Not only was this a region of difficult topography, but crossed over a sensitive environment that engineers were keen to avoid impact on. Engineers worked diligently to create a design that would avoid any potential impacts.
To do so, designers adhered to strict environmental standards. An example is the 840m twin bridges built over the Sugarloaf Ranges. These viaduct bridges were built 40m above the dense forest in an effort to minimise the environmental footprint on the region, keeping the forest beneath open for wildlife and respecting Aboriginal customs. A video detailing this construction can be viewed here.
Another issue presented with the construction of the expressway was the inconvenience caused to the South Maitland Railway. It was decided that the expressway would pass underneath the railway, and in doing so the railway needed to be realigned. A 1km realignment was constructed including a railway bridge over the expressway, with the switchover from the old to new railway line conducted over a continuous 120-hour period, allowing for minimal disruption along the line.
At its peak production an estimated 1500 workers were constructing the expressway along its 40km route. Over the course of the project roughly 5 000 000 cubic metres of earth were moved, subsequently recycled back into the project as part of the expressway’s strict environmental policy. Up to 100 000 trees and shrubs were planted along the route as part of rehabilitation works.
The Hunter Expressway was to join with the New England Highway at Branxton as the main through road for traffic, meaning those coming east along the NEH wishing to continue on the NEH would need to turn left to continue along the NEH, and vice versa. At its southern end the expressway was to link up with the Newcastle Link Road at Cameron Park, thus allowing constructors to modify the existing interchange with the F3. All existing bridges were maintained; the former interchange can be viewed here on Ozroads. Access southbound on the F3 to westbound on the HE, as well as eastbound on the HE to northbound on the F3, were not given. At first there had been a desire to construct a trumpet interchange for access to the Hunter Expressway, however it was found that this loop would be a restrictor on speed for the primarily-freight trucks using the route, slowing traffic down. Thus, a partial-Y interchange was proposed, a faster way for traffic to join the interchange, involving a flyover ramp rather than a tight loop. Original proposals put this bridge between the F3 and Hunter Expressway, however this was found to be too difficult to construct. The final design placed this bridge over the expressway, as pictured in the picture at the top of this page. The high bridge makes the interchange one of the highest interchanges in the country, closely behind the Light Horse Interchange. The various incarnations of the design can be seen in the below slideshow.
Being a rural expressway, roundabout interchanges were the most commonly used form of interchange. This form of interchange is generally​ favoured in rural locations, able to deal with smaller volumes of traffic efficiently. More about interchanges can be read here.
The expressway was originally set to open in September 2013, however delays shifted this date into March 2014. After four years of construction, the expressway was officially opened to traffic by Roads Minister Duncan Gay on the 22nd March 2014. With its opening, motorists now had access to;As part of its opening, the Hunter Expressway was assigned the M15 moniker. Originally designated the A46 moniker, it was decided that the Newcastle Link Road and subsequent route into Newcastle (including Newcastle Road, Griffiths Road and Parry Street) would instead receive the A15 moniker. In turn, rather than the initially intended A15 marker, the New England Highway between northern Newcastle and Branxton was given the A43 moniker, an extension of route A43 along the Pacific Highway. This move by the RMS ensured that logic prevailed. 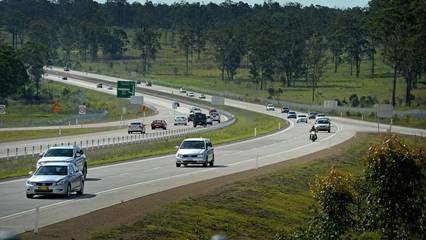 Traffic moving freely along the expressway post-opening
​Post-Opening and Current Day
Prior to its opening, proponents of the project stated an economic boom in the region would occur as a result of its opening. Travel time between the Hunter and Newcastle would be cut by 28 minutes, with a reduction of between 15 000 and 30 000 vehicles a day along the New England Highway. Many, however, remained sceptical of the project, especially in towns along the New England Highway such as Maitland, believing the expressway would create a bypass that would reduce tourism and customers in town centres, impacting the local economy.
Regardless of these sceptics, the Hunter Expressway quickly became a success for the Newcastle and Hunter Region. As a result of bypassing towns, a reduction in traffic through city centres provided towns the opportunity for revitalisation, increasing customers attracted by a quieter town, and helping the local economy. Moreover, the expressway resulted in large housing estates opening up near the expressway. These housing developments helped boost the economy, including such large scale projects as the $400 million expansion of The Vintage, a golf resort in the Hunter.
By allowing easier access to the region, the Hunter Expressway has greatly increased connectivity and tourism in the area. With the opening of the NorthConnex due for 2019, it will soon be possible to drive between Sydney and the Hunter Region without encountering a single traffic light (or possibly one traffic light if coming from eastern Sydney). More importantly, the expressway has greatly enhanced connectivity for freight companies between the Port of Newcastle and the Greater Hunter Region.
A reduction in crashes by 20% in 2014 compared to that of 2013 through Maitland has been attributed to the Hunter Expressway, greatly increasing safety for motorists and pedestrians alike. Traffic times along the Hunter Expressway are relatively smooth, with minimal delays encountered.
Thousands of motorists use the expressway every day, realising its massive benefits to the economy. Its bypassing of the New England Highway has finally brought to life a proposal over 50 years old, benefiting all those involved with the expressway. During its construction the expressway was the biggest transport project in NSW. Currently NSW’s newest expressway, it is set to continue to benefit motorists, businesses and residents alike in the ever-expanding Hunter Region.
Interchanges- (read the guide here)
A map detailing the various interchanges can be viewed here. As with the F3-M1 Pacific Motorway, the interchanges along the M15 Hunter Expressway have been allocated names based off their location. View the below image larger here. 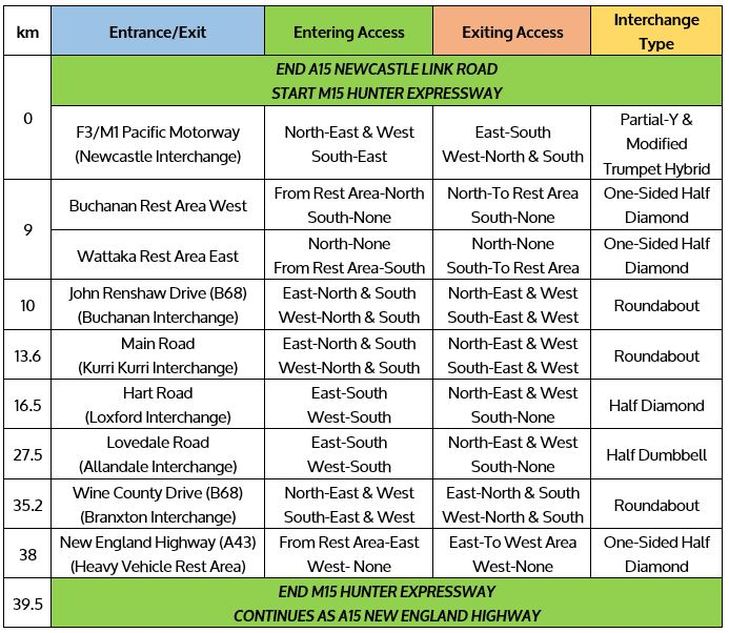