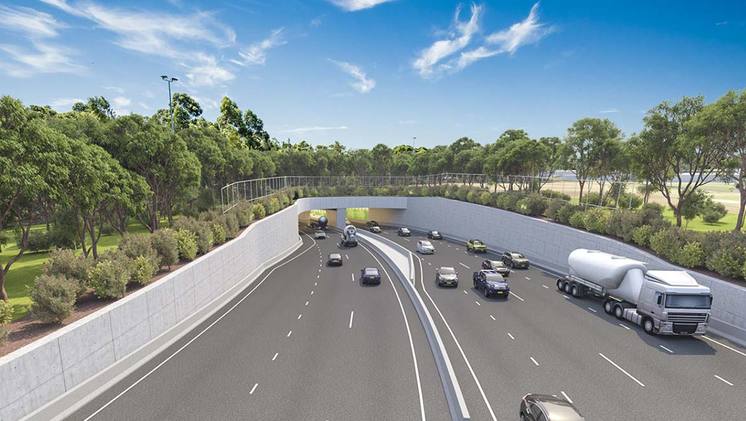 ​Stage 1
SSI Scoping Report
Prior to the official October announcement of the project, in September 2017 the RMS lodged its State Significant Infrastructure (SSI) Scoping Report to support a State Significant Infrastructure application for Stage 1 of the F6 Extension; this report may be viewed here. The scoping reported listed several benefits that would come of the extension as a whole, including improved travel times for residents and businesses in the region, reduced congestion on the arterial and local road networks, and economic growth in the Sutherland Shire and Illawarra.
At this point, concerns brought up by the community were detailed in the report. These ranged from concern over a perceived increase in traffic along President Avenue and the Princes Highway south of Kogarah with the opening of the motorway, concerns over its environmental and health impact, concern over a potential reduction in parking availability along President Avenue, and concerns for pedestrian, cyclist and motorist safety.
The report proposed that Stage 1 of the project comprise of- No decision had yet been made on tolling.
The report also acknowledged that a reduction in air quality would occur throughout the construction of the project in the area due to construction vehicles, earthworks and numerous other factors. However, it is stated that an expected improvement in air quality will be recorded along roads experiencing a decrease in traffic post-opening. Despite this, it states that a potential decrease in air quality may be recorded near ventilation facilities  and within the tunnels.
Several other issues, such as noise, biodiversity, health and economic factors were addressed in the report.
Consultation was subsequently undertaken with the community between October and December 2017. The Community Feedback Summary was released in June 2018 and may be accessed here (more information on public concerns available below).
​Final Business Case
The Final Business Case was released by Infrastructure NSW in June 2018, which can be accessed here. The government evaluated the cost of the project to be at $2.512 billion; $1.899 billion for construction and $613 million for operation. The Benefit Cost Ratio was calculated to be 1:1.56. That is, for every $1 spent on the project, $1.56 would be returned in some way to the economy. The report also states that construction on the project could begin by 2020 and reach completion by 2024.
The report also included a detailed map of the location of each stage of the project, as can be seen.
Further updates were also announced to the public at this time (which can be seen in this factsheet), including:The following design was also released to the public, offering a slightly more specific outline of the routing of each stage. 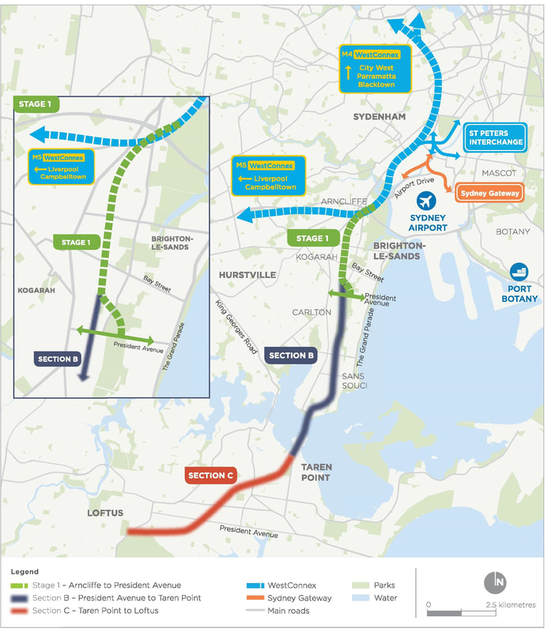 EIS
On November 8th 2018, the EIS for Stage 1 of the F6 Extension was released to the public. The EIS may be viewed here. The digital EIS consists of several fairly large files; it may be advisable to view the EIS at one of exhibition locations as detailed via the link. Alternatively, the Project Summary may be read here. An in-depth portal on the project may be viewed here. A video detailing the project was also released at this time by the RMS, and can be viewed below.
After further consultation with the community, the EIS was prepared in order to both address concerns, seek further submission from the community, and prepare the project for approval and construction. The EIS stated that the mainline tunnels would be built to three lanes, but marked to two from opening. The tunnels would have a speed limit of 80km/h, in line with most road tunnels in Sydney.
The EIS also listed numerous benefits, including a reduction of 2,000 trucks a day on surface roads, and a bypass of 23 traffic lights as compared to the alternative surface route. The report also detailed construction sites to be established at Arncliffe, Rockdale, President Avenue at the southern terminus of the motorway, and the Princes Highway at President Avenue.
It was stated that excavation of the tunnel would most likely take place using roadheaders that would use drilling and blasting methods throughout the excavation. The report addressed traffic, stating that several changes to roads in the region could occur, including more turning lanes onto President Avenue from the Princes Highway. The report also proposed a shared cycle and pedestrian pathway from Bestic Street, Brighton Le Sands, south to Civic Avenue, Kogarah, through Rockdale Bicentennial Park. Noise levels, air quality and biodiversity were also addressed in the report.
The report estimated that 3,250 jobs would be created between 2020 and 2024 during construction, with a generation of $4.3 billion of local activity during construction.
Prospective designs of the project as included with the EIS may be viewed below, as can an interactive map of the EIS proposal. 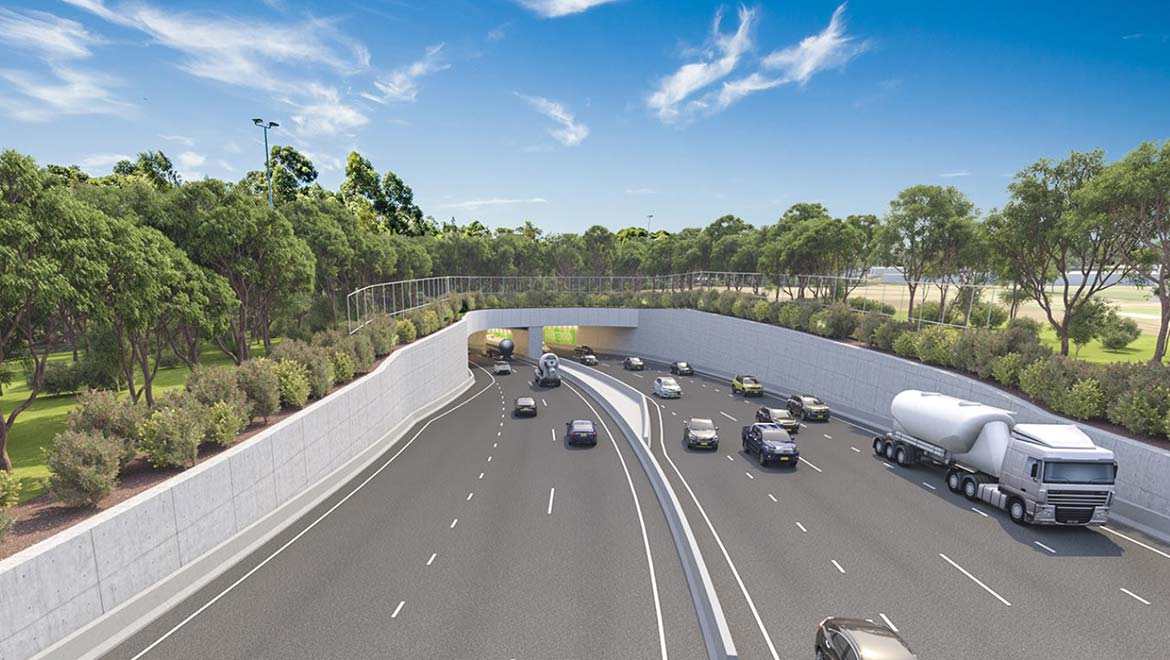 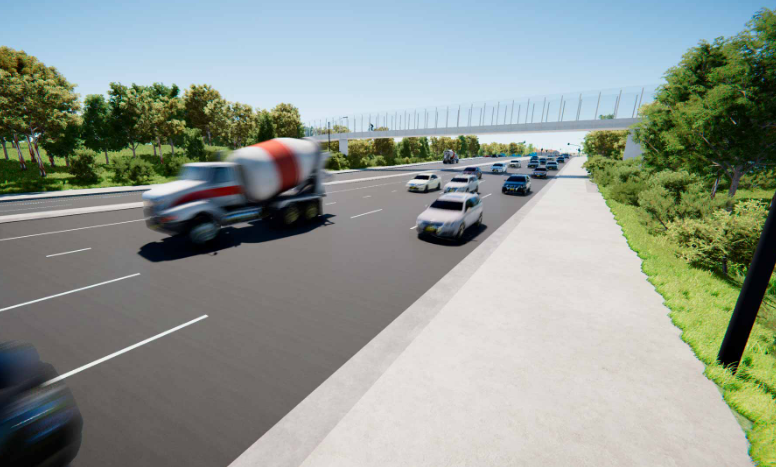 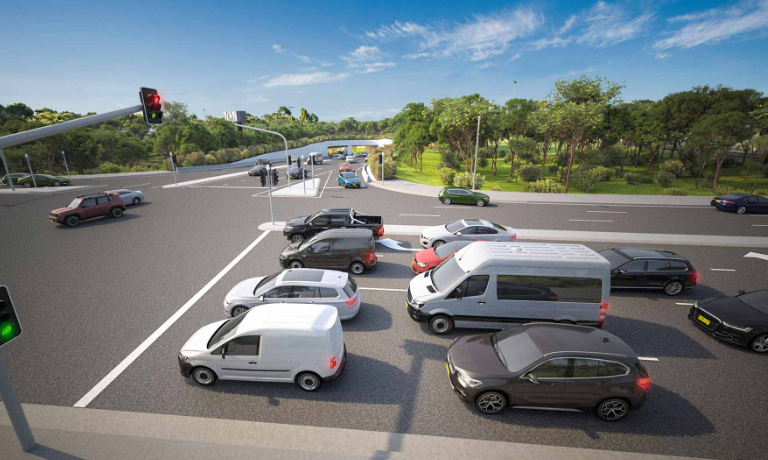 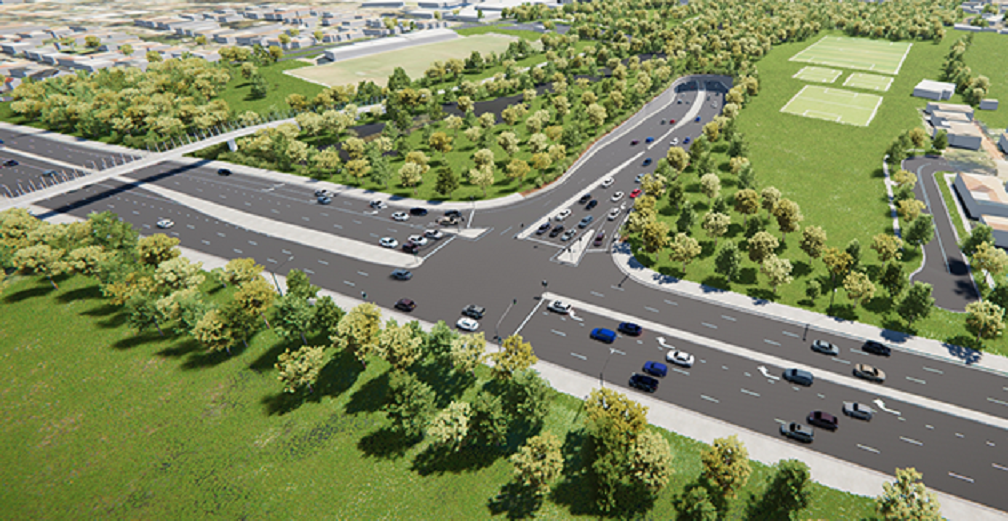 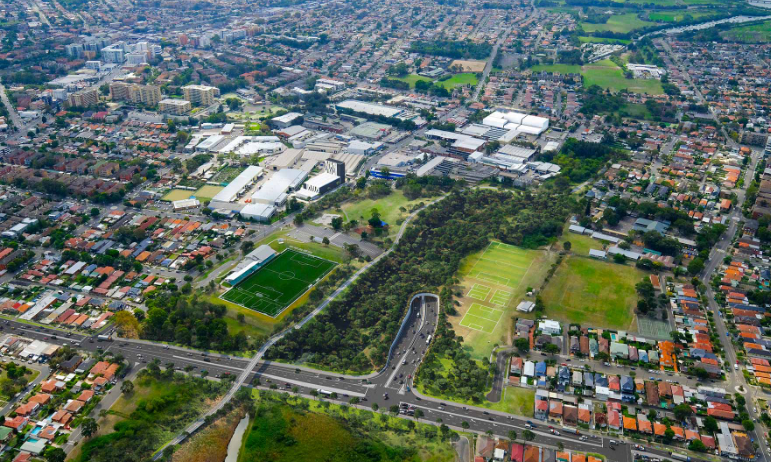 ​Public Response and Criticism
A significant amount of criticism has been directed to the F6 Extension over the years, escalating ever since its announcement in 2017. The following issues have been most significant to the community and wider public, primarily in the aforementioned Community Feedback Summary  (accessible here):

This chart details the percentage of complaints within each category.
An NRMA study conducted in May 2018 revealed that the entire project could cost anywhere between $8.6 billion and $10.4 billion. The study also indicated that an increase in traffic of 26% would occur on President Avenue at Kogarah, increasing to 37% with the completion of Stage 3. The impact of Stage 1 on surrounding roads, that the project claimed it would relieve, would be minimal; 9% on the Princes Highway at Rockdale, and 5% on General Holmes Drive. Conversely, the study did reveal the project would bring $677 million a year worth of economic benefits from 2031.
Several concerns were addressed in the EIS.
Since the southern terminus of Stage 1 is located within the Rockdale Bicentennial Park, the park shall not be in use throughout construction. The RMS has thus vowed to allocate $20 million in developing “new and upgraded facilities to compensate for this loss of recreational and open space, and reinstate the facilities at the end of construction.” Ador and McCarthy Parks, located 1km north of the Rockdale Bicentennial Park, will be upgraded, including a new skate park and an upgrade of the McCarthy Park field to full-size. Brighton Memorial Playing Fields will also be upgraded. On completion of the project, the East Bicentennial Playing Fields will be returned to the community.
Measures to limit noise levels during construction include use of acoustic sheds at the Rockdale and Arncliffe sites, as well as site hoarding (barriers around the sites to limit noise).
It has been claimed by the RMS in their EIS project summary that, with regard to air quality, “Under expected traffic conditions for the project, the predicted contribution of tunnel ventilation outlets to local air quality was negligible.”
Protests have been frequent ever since the project’s announcement, with such groups as the "F6 Action", formed in 2017 to raise public concerns about the project. Accusations that the project will benefit the WestConnex operators, by feeding more traffic into its system, has dogged the project. Further, the decision to not extend the project to Waterfall has been viewed by many as short-sighted, with some questioning why the project is known as the F6 Extension despite no intention for the project to ever join the F6. Finally, some public criticism lies in a preference for the prioritisation of public transport over a new motorway.

Whether or not the project is being constructed by the government intentionally to support the WestConnex and its toll operators, as many believe, is debatable. In all honesty, while the prospect that private investors will benefit significantly from the project does not entirely please me, from a road perspective so long as the road helps to reduce congestion, I am fine. Except, of course, I am not entirely convinced that this motorway will help the community.
​First and foremost, the fact that the F6 Extension is not set to meet the current F6 at Waterfall is unusual and disappointing. To have a roughly 12km gap between Loftus and Waterfall will have a significantly adverse impact on traffic. Currently, the Princes Highway between Loftus and Waterfall is the least trafficked portion of the highway, however this is irrelevant. Once the project is completed, traffic will be dumped onto the highway at Loftus, shortening the time for cars to arrive at Loftus and thus increasing congestion along a road not constructed to handle the resultant influx in traffic. A full motorway link between Wollongong and Sydney has been promised for decades, and that this may never happen due to a short 12km gap is problematic. The RMS may not see it now, but as much as I hope to be wrong, this choice will likely be a costly mistake.
I should state that I am aware that most plans in the past to construct a motorway within the gap would involve destroying parts of the Royal National Park, which is why I believe the government should take great care with any designs to construct this missing link, investigating alternatives to building through the national park, most probably with a tunnel. This would be costly, but in the long-term a necessity.
The current route that traffic generally takes from Sydney CBD to Wollongong is along the A1/M1-F6 corridor, which traverses the Eastern Distributor and General Holmes Drive, along with several other interconnecting roads. Yet there is no intention for Stage 1 of the project to connect to General Holmes Drive. Thus, vehicles intending to travel from Sydney CBD to the south via the F6 Extension will have several route options, the motorway option being along the Western Distributor and the Anzac Bridge to the Rozelle Interchange, then south along the WestConnex M4-M5 Link to the St Peters Interchange, then down the WestConnex New M5 to the F6 Extension. It is easy to see how this route will significantly benefit operators of the WestConnex.
In all honesty, however, it is not the benefit to toll companies as a result of this road that concerns me. Rather, it is the potential lack of any benefit to the public as a result of the motorway; tolls can significantly detract users. Australia has been host to many toll road failures, such as the Clem Jones Tunnel in Brisbane. That this road may be constructed and fail to serve its purpose would be a huge disappointment.
​Stage 1 of this project is ridiculously short. It does not come even close to the F6, and more importantly it does not bypass an existing corridor effectively, instead making its own corridor starting at the St Peters Interchange. An expensive toll is already highly likely to repel users, primarily due to the routing of the motorway that encourages users onto the expensive WestConnex. The fact that Stage 1 is so short, barely getting motorists past the Inner South (until the construction of Stage 2 at an unknown date in the future), will only further detract users from the road. As a result, congestion will remain on surface roads, rendering the project a failure.
​On the flipside, if the project is not extended to Waterfall, congestion after completion could in fact become more severe on the 12km gap, creating a bottleneck between two high-speed motorways that will harm the overall productivity of Sydney’s link to the south.
I do, on the whole, support the construction of the project, but I believe that it is important that both the public and government remain aware that there is no guarantee that this new motorway will decrease congestion. Unless changes are made to the project, and extreme care is taken to prevent any failures on the scale of projects like the Clem7, it is entirely possible that the motorway will never fulfil its true purpose of reducing congestion between Sydney and Wollongong.