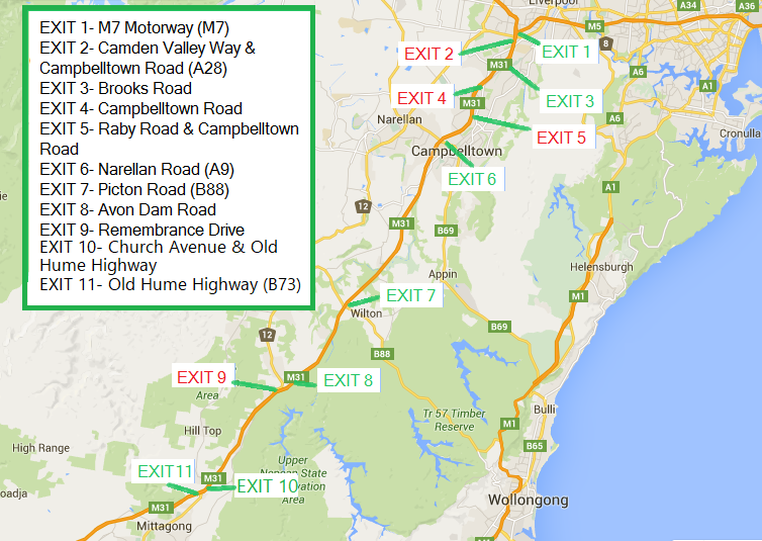 Exit Numbering along the Hume Motorway, the first motorway to recieve the system. As of June 2016, routes in green have been signed at least one way, and routes in red are yet to be confirmed. Copyright Roads Australia
UPDATE- 22/07/2016- There hasn't been any progress on the Exit Numbering System in Sydney since May, which is disappointing.
​
Exit numbering involves the allocation of a number to an exit on a freeway. Drivers simply need to remember the exit number rather than the road name when navigating a freeway. This system is present across the world including the United States, and is also currently operational in Queensland and Victoria.
For sure, this system would be a great addition to the NSW system, especially considering the length of the urban freeway network.
In May 2016, the RMS begun implementation of exit numbering along the M31 Hume Motorway from the M7 at Prestons to the Old Hume Highway (B73) at Aylmerton. It is believed that this implementation is a trial, to eventually be succeeded by the roll-out of the system across the entire city. The above map can also be viewed here.
Personally, I believe the system does not need to be rolled out on such highways as the remainder of the Hume Highway and the Pacific Highway, since these highways are used primarily as through routes with focal points clearly signed. As our system develop this may change.
However implementation on the following freeways would be beneficial to drivers;There are two systems which can be used; sequential numbering involving the numbering of the exits in sequential order from the start of the freeway, and distance-based numbering, which generally numbers an interchange based on how far it is from the CBD.
For example, exit 11 on the above map would be exit 108 under the distance system, as it is around 108km from Sydney.
The RMS appears to have chosen sequential numbering, which Victoria uses, unlike Queensland. While naturally numbers will be smaller, this can cause trouble too if a new interchange is added.
​Hopefully the roll-out of the system addresses any confusion and, essentially, works.
Images of the trial can be accessed here, taken  by someone else on Flickr.
The images below have not been taken by me. These compare different exit numbering systems from around Australia and the world.
Take a vote to decide which sign is best at displaying the exit number. Leave any comments underneath
Results
Sydney and Queensland appear to be the highest, but Queensland edges just ahead of Sydney as the most preferred example of exit signage. I have to say that both Sydney and Queensland are fairly similar, but using a topknot, which is more noticeable, is certainly advantageous. On another note, as of August 2017 little progress has been made on exit numbering other than some signs on the Eastern Distributor near the CBD. It remains to be seen whether a roll-out is imminent in Sydney, but it would certainly be beneficial and welcomed.
LINKS
Powered by